Imagine being raised by a narcissist…

Unfortunately, many people don’t have to imagine at all.  They have lived that life.  And many don’t understand what happened to them. 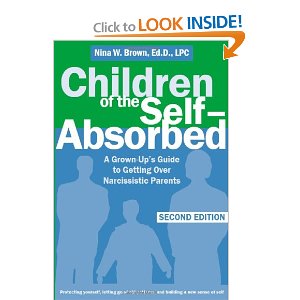 I have neither the time nor the expertise to write the kind of help the children of narcissists need.  However, I can tell you what happened and that may be a place to begin healing.  After you read this, you may want to follow up with books like “Children of the Self-Absorbed” by Nina Brown, or “The Mirror Effect” by Drew Pinsky (the final chapters of this book are quite helpful).  Then you may want to find someone to talk with, someone who understands narcissism.

So, what happened?  Step back for a moment and think about your parent(s), particularly the one(s) that fit the narcissistic characteristics we have discussed here.  Let’s pick on Mom.  Mom cares very deeply, on a true heart level . . .  about her own image.  What, you thought I might say “about you?”  No, that wouldn’t describe a narcissist.  She cares about what others think of her.  She got married for that reason.  When she got pregnant, she pictured herself as the center of attention and just knew that her baby would cause people to say “ooh” and “aah.”  She would be the envy of the neighborhood and the extended family.

So, the baby probably was never really seen as a separate person.  You were just an extension of her.  Praise given to you was hers.  Attention given to you was hers as well.  Because the narcissist has an inability to empathize with others, you got attention from her only when she was affected by you.  In other words, only when you brought her something positive or something negative.  The rest of the time you just were not that important.  Not exactly real.

Think about this.  When you did something good, she felt praised and important.  When you did something bad, you were a threat to her image.  The same mother could tell you how special you were and treat you like a prince or princess—and then cuss you out or degrade you for some minor infraction.  You might have worn the most expensive clothes, because you were so special.  But when you got those clothes dirty, you were an ungrateful little wretch.  But you were only three and you didn’t understand.  You didn’t know whether you were special or disgusting, worthy of praise or a disgrace to the family.

Children of narcissists grow up without foundations.  They never quite know where they stand with people.  Sometimes that becomes their primary concern in life, what people think of them, and they carry the narcissism into the next generation.  Sometimes, so weakened in personal resolve and value, they become supply/food for other narcissists.

What do you do now?  First, understand that it was never about you.  You were used and abused.  Read the books I mentioned and seek out some help.  It will help.

There is so much that could be said about this.  I apologize for keeping it short, but it could be very long.  In my experience, when the father is a narcissist, look for religious legalism.  His image is reflected by the behavior of his family.  Bottom line: it isn’t about the kids.  The kids are just normal kids who grew up with narcissistic parents.

There is a love that is beyond the love of parents, more foundational, more important.  That love is there for you.  It has never changed.  You are acceptable to Jesus.  He does love you.

22 responses to “Children of Narcissists”