The Judgment Seat of Christ 6

So I think that several things will happen.  In some sense, in that great Day, the judgment/bema seat will be set up and Jesus will sit on the throne.  As described in Matthew 25, all nations (every person) will appear before Him and He will separate those who trusted in Him from those who did not.  On one hand will be those who are saved.  On the other will be those who are not.  To the former He will say, “Come!”  To the latter, He will say, “Go!” An eternal separation will be accomplished on the basis of faith expressed during the time of the body (this life).  No believer should fear this time. 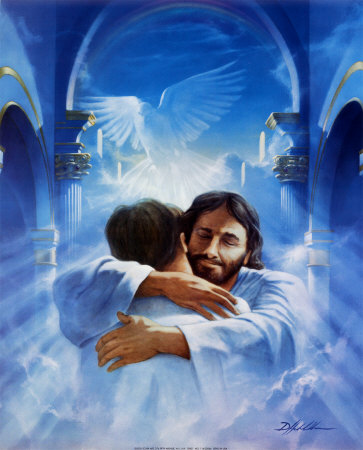 Then He will focus on us.  He will welcome us and we will understand finally that it was nothing of us that got us there—it was all Him.  We will joyfully throw everything we think we have done for Him into the fire, knowing that only what He accomplished through us will survive.  (1 Corinthians 3:9-15)  Some of what we have done will not survive.  It will burn because it will be of us.  Those times when we thought we were doing something “for Him” but really were just trying to appease our own guilt or make ourselves look good.  We will “suffer loss,” but not very much because we will give every credit to Him anyway.  That will be okay with us, because we will understand the whole truth.

On that Day, we will see the walls that flesh and sin have created fall away forever and we will understand the truth.  Those divisions between us, between believers, will be seen in the light of His truth.  There will be no Calvinists or Arminians, no legalists or liberals, no Baptists or Episcopalians.  The labels will disappear and we will love each other with His love and accept each other as He has accepted us.

And what a Day of rejoicing that will be!

The Judgment Seat of Christ 5

The “bema seat” was simply a platform in an open area where people would gather to hear the judgment and wisdom of the authority.  It wasn’t always about punishment.  Sometimes the authority would settle disputes.  Sometimes he would establish or communicate laws.  Just like today’s courts, the bema seat judgment was used for more than pronouncing sentence on offenders.

In Romans 14 we are cautioned against judging each other when we have doctrinal disputes.  One believes he may eat all things, Paul says, while another may eat only vegetables.  What may be wrong for one may not be wrong in the heart of another and the only One who gets to make the call is Jesus.  He is the authority who will sit in the bema seat, not us.  If it is acceptable to Him, then it ought to be acceptable to us.

Who is right and who is wrong?  Let’s wait until our Lord tells us.  The basic message in this passage is that we must not set ourselves up in the Lord’s position.  He is the judge over what is acceptable and what is not.

Notice that this, again, has nothing to do with salvation.  It doesn’t even have anything to do with rewards.  In the end, we will learn from Jesus.  He is our authority.  This presents a mystery for those who want to live by rules.  I envision a time when the Lord says, “Well done” to someone who smoked cigars, and “Well done” to someone who refrained from smoking.  The earthly rules of the legalists will found nowhere in this judgment.

The Judgment Seat of Christ 4

There are a couple ways for us to take this idea of the judgment seat of Christ.  First, according to Matthew, all people will appear before Christ on the throne and He will separate the sheep from the goats.

“When the Son of Man comes in His glory, and all the holy angels with Him, then He will sit on the throne of His glory.  All the nations will be gathered before Him, and He will separate them one from another, as a shepherd divides his sheep from the goats.  And He will set the sheep on His right hand, but the goats on the left.  Then the King will say to those on His right hand, ‘Come, you blessed of My Father, inherit the kingdom prepared for you from the foundation of the world:  for I was hungry and you gave Me food; I was thirsty and you gave Me drink; I was a stranger and you took Me in;  I was naked and you clothed Me; I was sick and you visited Me; I was in prison and you came to Me.’ Matthew 25:31-36(NKJV)

As Jesus addressed the Jews, He spoke in language they would understand, even if they might not have liked it.  They would have liked it if Jesus had told them that all the Jews would be on the right hand and all the pagans would be on the left.  That would have made sense.  Instead, He put it in the context of compassion.  And He clearly points out that “all nations” would stand before Him on that day.  So the Lord is saying that those who did what He would do, whether Jews or not, would be saved.

We understand, from the teachings of Paul, that the Spirit in us moves us to do what the Lord would do.  We know that only believers have the Spirit residing within them.  What that means is that those who are led by the Spirit of God, those who live in relationship with the Lord, will be saved.  Ultimately, salvation does not come from the works themselves, but through the trust/faith that connects us to the grace of God in Jesus.  The deeds done in the body, mentioned in 2 Corinthians 5:10, are judged not by whether they are good works or sins, but by whether they are the work of the flesh or of the Spirit.  That’s why Paul says that we have put to death the deeds of the body in the Spirit.  The works of the flesh are “foul” (the word used in 2 Cor. 5:10) and the works of the Spirit are good.

I understand that this can be confusing so let me try to make it simple.  On that Day, Jesus will look on all people and separate those who belong to Him by grace through faith from those who have trusted in something else.

The Judgment Seat of Christ? 3

So what is this judgment about?  Even if we relieve the concerns about losing our salvation or finding out that we really were not “good enough” after all, the idea of judgment is still something that inspires a certain fear in us.  Some preachers have told their people that every event of their lives will be displayed for all to see.  (Wouldn’t that be fun?)  Their good works will be acknowledged and their secret sins will be exposed.   Then, after suffering through that excruciating experience, all their tears will be wiped away and they will be welcomed into glory forever.  No wonder they are afraid!

What about our sins being removed from us “as far as the east is from the west?”  What about the past tense of our cleansing in 1 Corinthians 6:11?  (“And such were some of you. But you were washed, but you were sanctified, but you were justified in the name of the Lord Jesus and by the Spirit of our God.”)  What about what Paul said in 2 Corinthians 5, our passage, concerning the fact that the Lord will not “impute their trespasses to them”?  Are these important truths suddenly forgotten?

This is one reason I camp on the fact that there is no longer any sin on the account of a believer as far as God is concerned.  God has already dealt with our sin, past and future, in the sacrifice of Jesus Christ.  When we stand before the judgment seat of Christ, we will already be sinless.  Sin is not an issue now and will not be an issue then.  (Now, I realize that some will be greatly concerned by this idea.  I am not suggesting that sin has no effect on us.  Of course it does.  Here and now.  Sin is still something we should avoid and we will avoid it as we follow Jesus.  But it is no longer laid on our account as something for which we must answer in the end.)

The Judgment Seat of Christ? 2

Our salvation is secure in Jesus.  We did nothing to deserve or earn our salvation and we do nothing to maintain it.  We cannot.  If we could become saved or stay saved through our own effort or even in part by our own effort, then the whole message of the gospel would be quite different.  We would no longer be saved by grace through faith, but we would be saved by grace and works.  I will be very clear: if our works can get us into Heaven or keep us out, then we are not totally dependent on the love of God in Jesus.

So, as we head toward the judgment seat of Christ, those who are believers have nothing to fear.  Either we are saved completely by the work of Jesus, or we have no hope at all.  We could never be good enough, even in adding “our part” to His.  If salvation is ninety-nine percent from Jesus and one percent from us, we have no hope.

Bottom line: our salvation will not be up for grabs at the judgment seat of Christ.

The Judgment Seat of Christ?

(Tackling a subject like the events of the end times or the process of eternal judgment is a challenge.  We simply do not have all the information.  We are supposed to trust in what we have been told and in the character of the Lord who loves us.  But I will take a stab at sharing how I interpret the idea of “the judgment seat of Christ.”  Please, I know that I appear to combine the ideas of the “Great White Throne Judgment” and the “Judgment Seat of Christ” and I know that some people have spent years dissecting Scripture and designing timelines and systems for explaining all of this.  My gut tells me that we don’t know as much as we think and that the unfolding of these events will surprise all of us.  These are just some of my thought.  Fools rush in….)

“For we must all appear before the judgment seat of Christ”

That statement is found in 2 Corinthians 5:10.  It is the plain word of God.  Does it scare you?  Sadly, it is used in churches around the world to frighten believers into better behavior, more good works, and less sin.  Many who have been told that they are saved by the blood of Jesus have also been told that they will still be judged and may “suffer loss.”  Many believers live in fear and anxiety because of the threat of this judgment.

Yet, Paul seemed to look forward to it.  In 2 Corinthians 5, Paul writes about dying.  He knows that he has enemies and that his walk is dangerous.  He knows that he and his companions could be put to death for their message.  But, if that were to happen, he is confident in his standing with the Lord.  In fact, that is a key word in this text, “confident.”  He is “always confident,” he says.  Why?  Because the Lord has prepared him for ministry and for death.  Because the Lord has given him “the Spirit as a guarantee.”  Because he is “well known to God.”  Because he is a “new creation.”  Because God has already reconciled Paul to Himself.  And because God will not impute Paul’s sins to Paul’s account.  All of this is in the chapter.